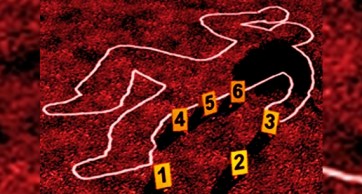 Hyderabad, May 13 (IANS) Extramarital relations after friendship over Facebook and an attempt to blackmail the woman with her obscene video clip led to the murder of a 32-year-old man in Hyderabad.

CCTV footage of the attack on the victim by another Facebook friend of the woman and his aide surfaced on Friday, more than a week after the assault.

K. Ashok (28) and his aide K. Karthik (30), both residents of Andhra Pradesh, have also been arrested.

CCTV footage shows how the victim, who was on his two-wheeler, was attacked with a hammer near Swetha Reddy's house in Prashanti Hills under Meerpet police station of Rachakonda police commissionerate on the night of May 4.

Kumar collapsed on the ground and some passersby shifted him to a hospital, where he succumbed two days later.

Police initially treated it as a case of road accident. However, following the autopsy report and some detailed investigations, shocking details came to light.

Swetha Reddy, wife of a software engineer, had developed friendship with Kumar, a photographer and resident of Bagh Amberpet area in the city, in 2018. Soon, their relationship became intimate.

The police investigation revealed that during a video call, Kumar asked her to get undressed and when she complied he recorded it. He then started threatening to share the video clip with her family members if she didn't marry him.

Kumar was also roaming around the woman's house on his bike to blackmail her. Panicked over his threats, Shweta Reddy contacted her another Facebook friend Ashok, a resident of Vijayawada. Ashoka with his aide Kartik came to Hyderabad and the trio hatched a plot to eliminate Kumar.

As per the plan, the woman called Kumar to her house on May 4. When he reached near the house, Ashok and Kartik, who were waiting in ambush, attacked him. They hit on his head with a hammer. He fell unconscious and slipped into coma.

Police solved the murder mystery after analysing Kumar's call data. Since the last call on her mobile was made by Shweta Reddy, they questioned her and she finally confessed to the crime.

She also told the police that after calling Kumar, she had changed her mind and had sent a message to Ashok and Kartik to leave him. but by then they had executed the plot.