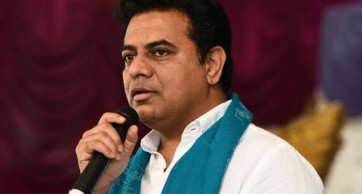 The minister said the governor will have to choose one. "There is a saying: running with the hare and hunting with the hounds. You cannot have a dual role. You can't be Telangana BJP leader and at the same time a governor," he said during an interaction with a select group of journalists.

"Is it okay for the governor to say that if I had kept the file with me for 15 days the government would have collapsed. Can a governor talk like this, indulge in political speech and say I could have dethroned the government. Is it fair?" he asked.

He pointed out that the governor is an institution. "It is a titular position and not a democratically elected position. She is nominated by the central government," he said.

KTR, as the minister is popularly known, claimed that the governor delivered Republic Day speech without the state cabinet giving its consent. "The governor makes a speech on January 26 and the speech has to be approved by the cabinet. No consent was given by the council of ministers but she goes ahead and makes a speech that Prime Minister Narendra Modi granted medical colleges to Telangana. I request the honourable governor to show medical colleges the honourable Prime Minister has granted for Telangana," said KTR.

"Respect is a two-way street," he remarked on Tamilisai's allegation that the state government is not respecting the office of the governor.

He also found fault with the governor's statement that the state government did not even show respect to a woman. "Why take a recourse to this," the TRS leader asked while pointing out that a woman chief minister in West Bengal is getting the flak from the governor there.

"She is imagining stuff and doing things beyond her limits as a nominated person, KTR said on allegations of breach of governor's protocol. "Is it a shame to go around by road?" he asked on Tamilisai's statement that travel by road is the only mode of transport available for her in the state.